At least once, sometimes twice a year, my sister sends me a care package of Iowa Chops from Amana Meats.  These aren’t just any pork chop either, they are really more like a pork steak. Each steak is about 3/4 lb, 1″ thick, bone in cuts of pure porky goodness. Normally, I season these chops with my Green Chile Rub and grill them like a steak but this time I wanted to do something a little different….a barbequed pork chop!!


Anyway, back to cooking. I wanted to infuse the chops with all the BBQ flavor of a pork butt, so I cooked them like a pork butt. First I brined them, then I seasoned them with BBQ Rub.  Next, I slow smoked them over mesquite charcoal and topped them off with a brushing of BBQ Sauce. 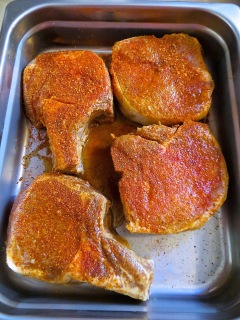 I combined all the ingredients in a large sauce pan and brought it to a boil.  I stirred frequently until all the salt and sugar had dissolved.  Once the brine was done I removed it from the stove and let it completely cool.  After the brine had cooled I placed the chops in a large plastic container and covered them with the brine.  To keep the chops submerged I placed a plate on top of them.  Then the whole thing went into the fridge over night.


To cook these chops I filled the Big Green Egg with mesquite charcoal, lit it and then dropped the plate setter in for indirect heat cooking.  I seasoned the chops with a good dusting of my Red Chile BBQ Rub and slow cooked them in the mesquite smoke for about an hour, until they reached an internal temp of 120.  Since I couldn’t cook these ribs long enough to build a bark, I at least wanted to get a good browning on them.  I removed the plate setter and finished cooking them over direct heat.  I kept flipping and moving the chops around so they would be good and brown.  On the last flip I brushed them down with some BBQ Sauce and let the sauce set up on the meat, I was being careful not to let the sauce burn.


The BBQ Iowa Chops were absolutely amazing, it was all the great flavors of a smoked pork butt packed into a hefty pork steak.  The brine gave it a tangy sweetness, the mesquite gave it a rich smokiness and the sauce completed it with a spicy bite. We rounded out this meal with some fresh green beans, a baked potato and a giant loaf of homemade Italian bread.  Looks good doesn’t it?  Well that’s just the way we roll around here.

I have to admit, I am down right stingy with these chops, Cheryl and I save them for ourselves and don’t share them with anyone, including my sister-in-law Trissi and her life partner Sean.  As I see it, if Trissi & Sean were meant to have some Iowa Chops, my sister would have sent them a box.  I guess I was having a weak moment, because I decided to give in and share our precious pork with them. I know they were just overwhelmed with my generosity.