Well it’s the day before the big feast which means only one thing, brining turkey.  All I have done today is brine my turkey.  I started out researching brine recipes and decided to use one from The Pioneer Woman.  This is her favorite recipe and I think she used it too kick Bobby Flay’s butt in the Thanksgiving Throwdown last week on Food Network. Here’s a link to her recipe, Thanks Ree,  Pioneer Woman Brine Recipe.

I then went to the restaurant supply store to buy a special brine bucket.  I have done enough brining lately that it justified the $32 for a nice brine bucket. I have used ice chests, 5 gallon bucket and large stock pots to brine in, I just thought it was time I got a really nice bucket specifically for brining. I was also on quest for pecan wood chunks for smoking my turkey, more on that later. 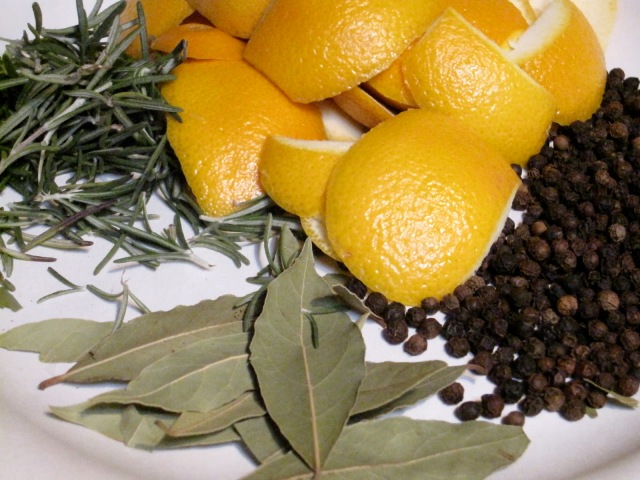 In a large sauce pan or stock pot add the apple juice, salt and brown sugar and heat until the salt and sugar are dissolved into the liquid or most of it at least.  Then add the orange peels and spices and allow to simmer. The cloves were a last minute addition that I made, the brine smelled so good cooking I thought the clove would be a nice addition.  Once the brine has had some time to simmer about 30 minutes turn off the heat and allow it to cool.  Then added 1 gallon of water to the brine bucket and added the turkey and brine, then added another 1/2 gallon of water until the turkey was submerged, breast side down.

The rule of thumb for a brine is one cup of salt for every gallon of water.  The sugar and other ingredients are used to cut down on the saltyness.

Tomorrow morning I will wash the turkey off.  Then fill the sinck with cool water and let the turkey set in the water to get some of the excess salt and brine off the bird.  Then it’s going on the smoker for about 3-4 hours.  And as always I will have pics and updates. Let’s see it’s about 8:30, there is still plenty of time to brine your turkey if you haven’t done it yet.

2 thoughts on “Time for Brine”